Prices subject to change depending on your attitude, read the sign. I think I’m going to like this place. It’s day two of my trip to Rarotonga and I’ve found myself at a quaint outdoor burger joint named Villi’s, just a short walk away from iconic Muri Beach.

The dress code here is casual. Flip-flops, shorts and a tee-shirt. And as a full-time ‘smart-casual’ kind of gal – I’m sure okay with that.

“Kia orana,” said the woman behind the counter, smiling with a kind of genuineness that you wouldn’t normally get at a fast-food joint on the mainland. Behind her, a younger girl is busy making patties from scratch – the biggest you’ve ever seen in fact, and the smell of burgers on the grill stirs my appetite in way that could only be described as primal.

I order their signature Muri Burger, which is a type of cheeseburger complete with home-made ‘special sauce’. Upon my first bite I am alive again. Since arriving on this slice of island paradise I have been surrounded only by fresh seafood – great news if you’re a lover of ocean cuisine – terrible if you’re like me and have a palette refined only to the things that walk and grow on land.

Reinvigorated, we head away to Vaimaanga to explore the ruins of the Sheraton Rarotonga Resort – a failed venture, once tipped to be the islands most luxurious attraction. Dubbed ‘Heart Break Hotel’ by islanders, the derelict site has all the elements of a great scandal: mismanaged funds, allegations of mafia corruption and the rumoured contract killing of one of its project managers.

Despite numerous attempts to resurrect the project, the last being in 2007 by Kiwi developers the McEwan Group, the 200-room hotel has celebrated nearly 28 years on the island – all without checking in a single guest.

Today, it’s as if time has stood still here. Massive copra trees, reminiscent of its former days as a plantation, shade the ill-fated complex; while creeping vegetation slowly reverts what’s left of the mammoth structures back to nature. 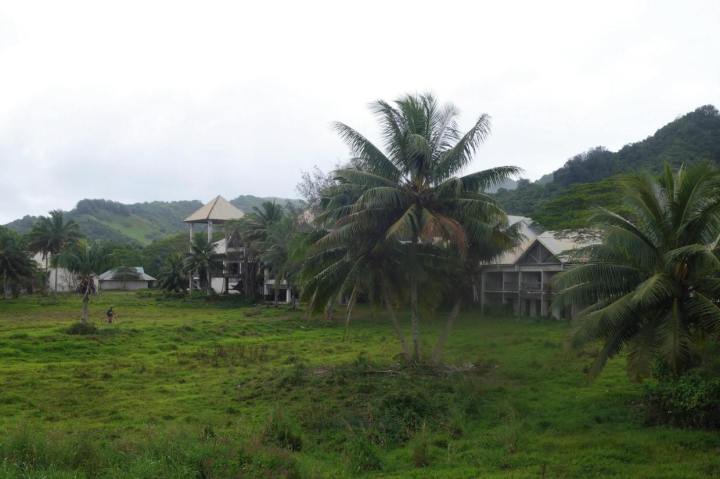 “It’s like we’ve walked onto the set of Jurassic Park, only 15-years later,” exclaimed my friend Steve. And I agree – this place is an urban explorer’s dream.

As we enter the foyer of the building, I’m careful not to stand on the glass and frazzled wiring that litter the concrete floors. Peeking into the suites, I can see moulded luxury spa tubs fitted in the bathrooms – complete with rusted silver taps; Light switches and fixtures that look ready-to-go, and to my untrained eye it appears the rooms were only moments away from welcoming its first guests.

Surrounding the dilapidated complex are spectacular views of rolling green hills and native foliage. And only a short walk away is a cascading waterfall and a white-sand beach. As I pause to consider all the ‘if-onlys’, the sight of a lone goat standing watch in a near-finished tower, bleating quietly at the cows roaming freely below, sends me back to earth – serving as a stark reminder of the hotel’s bleak history.

As the day wears on, we make our way back to our little cottage which backs onto Titikaveka Beach. Armed with towels, a ukulele and hot cups of tea, we step onto the beach through our private entrance to create bad renditions of pop songs and watch the sun disappear into the Pacific. Dusk colours the sky in brilliant hues of gold, orange and purple and it is now that we decide is the perfect time to take our first dip in the aqua lagoon.

Living in central Sydney, I’m used to laying my towel down next to thousands of tanning strangers on Bondi, so standing here practically alone – on what is the most beautiful beach I have ever seen – is the most unreal experience. It is only in the far distance, that if I really squint my eyes, I can see a pinprick silhouette of two people walking a dog along the dunes.

As the final flicker of sunlight disappears, a blanket of stars covers the night sky. And because light pollution doesn’t yet exist here, the entirety of the milky way can be observed by the naked eye. In the space of two hours I count eight shooting stars, which is more than the combined total of what I’ve seen my entire life living in suburbia.

Lying atop a picnic table, I reflect on just how much closer I feel to both nature and people since arriving in Rarotonga. Because it is here that we can truly appreciate the beauty of the night sky, the kindness of strangers and the serenity of the sea.

This feature was first published in travelBulletin FEBRUARY 2016